This here is Mother Theresa, who saved my ass when Horse thew me the 1st time while we were on the greenbelt 5 years ago.
I was dumped on the trail and he took off like a bat outta hell. He was heading home and fast. I was scared shitless, home was 8 blocks & across a very busy street away.
She was sitting watching TV she heard his  thundering hoofs on the pavement and she knocked her friend off the couch & flew out the door and yelled "HEY Where are You going?" at horse as he ran by. He stopped, looked at her, turned around and walked right up to her as if he was on a leisurely walk in the neighborhood. She had her kids give him treats while she went looking for me on the trail on her sons BMX bicycle.
I was so worried about horse and Theresa was worried about me. Her house became a MUST STOP for horse for a few years till she moved. I haven't seen her for a year or so now. He was very happy to see her. As he was rubbing his head all over her clean T-shirt she was telling me how much she loved him and she still has the photo I gave her as a Thank You present and that he wasn't a horse but a human in a horses body. 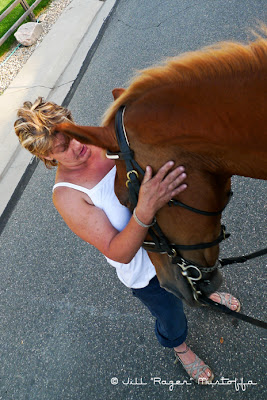 I got a tag for his bridle that very next day and carried my cell phone with me. As I mentioned in Day 40.
Posted by jill mustoffa at 6:45 AM