My Dad and Sandy came out one year to visit and they parked their winnebago in Chester's pasture.
Chester thought that was the greatest thing in the whole wide world he had humans for roommates. Well, in a way.  He would walk around the vehicle in the morning and look in the windows trying to get them to wake up and join him outside and he would even stick his head in to visit when the door was open.  So this started the whole thing of Chester joining me in the house. 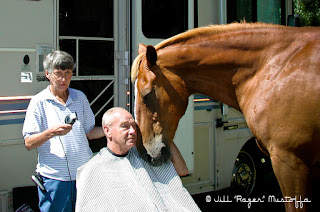 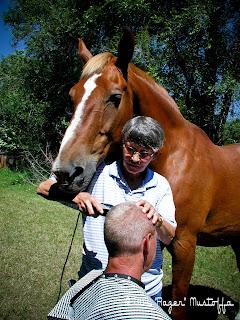 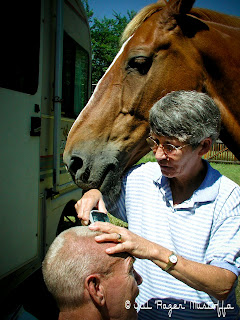 Chester had to be apart of the haircut but it was his nap time so he passed out, resting his head on Sandy's shoulder as she was trying to Dads hair. Sandy said she didn't want to wake him so she held him up as he slept and tried to cut dads hair at the same time.
Posted by jill mustoffa at 7:40 AM