These shots I had to include.

Mr. Merl he was an old rescue cat who was found in a horse barn with a bunch of ferrel cats. He was caught, neutered and his ear was clipped. I got him from a "No Kill" Shelter. He was returned to the shelter 2 times before I adopted him. He was a cat who was more of a dog but was really a human.
And said MARE with a scratchy voice not meow. When I 1st got him he gerbiled my books. Huh, now that I think back. I wonder if he and donkey have the same issues? Or did the cat tell donkey that he must eat paper as the goat told donkey to clean the ashtrays.
He is now my Dead cat who was my ½ dead cat.  I know that sounds crass. But when you have nursed an old animal thru years of health issues wondering if this is it, you become…. Well…… prepared for that time.

He was 17 yrs old, diabetic for 6 yrs, arthritic and a black spot on his lung to boot. I decided to treat his diabetic and related issues only. This cat would not die, he had many a close calls and every time the vet would tell me, I don't think he will make it. Damned if he wouldn't pull thru.
He was a cat that WOULD NOT DIE. 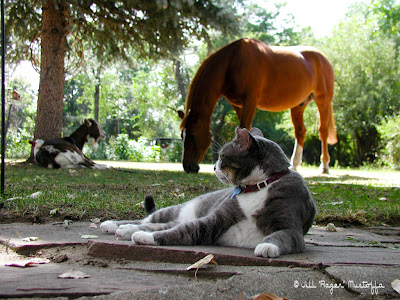 We had the best vet that anyone could ask for. And she was astonished and always said that he was a medical wonder & that his issues must be canceling each other out. 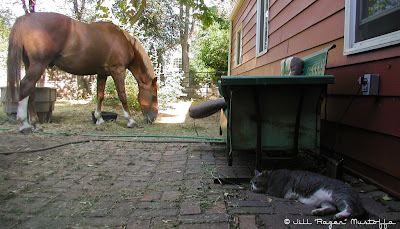 I have been waiting for him to tell me "this is it" now for 5 years. This year it happened a brain tumor was the thing that was his demise. I'm very proud of this cat and how he lived his entire life with dignity to the very last day of his 999 lives.
Posted by jill mustoffa at 7:07 AM