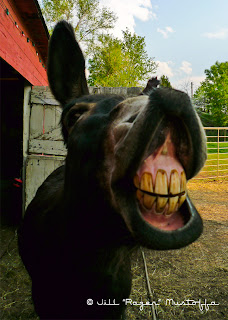 This is what I was greeted with the other morning. I have much more to say about this photo but I'm gonna be late for work if I tell you now!
This is called Flemhen response/reaction.
Horses and as you can see donkeys do it when they smell something unfamiliar and want to try and figure out what the smell is. You will see it most commonly in a stallion when he has just sniffed a mare to see if she is in season. Chester did this once to a mare who like him and once he flemhed that was it she would have nothing to do with him. She tried to bite and kick him. So in the animal world as in our world when a man acts in such a way, that is it well will have nothing to do w/ ya. Haha
Why Dino did this when he walked out of the stall?  I can only imagine he stuck his nose down the skunk hole that is in their stall. I came in one morning to feed and I kiss them both on their velvet noses and Dino smelled like skunk. Good thing I don't find skunk an offensive smell.
Posted by jill mustoffa at 9:09 AM